Back to Profile Gallery > WINFUNUSA 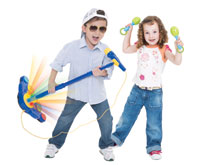 Some start-up companies begin operations without the backing of a parent company, but for WINFUNUSA, the situation is much different. Vice President of Operations Tom Salzmann explains that the firm is a branch of Winfat Industrial Co. Ltd., a Hong Kong-based toy firm.

“Our goal in establishing this company in the United States is to develop [Winfat’s] WINFUN brand,” he says, noting that Winfat sells products worldwide and has many private-label programs. “We’re at a stage where we want to develop additional products under our own brand name.”

Glen Ellyn, Ill.-based WINFUNUSA has many products to start with, Salzmann says. It offers 60 items to customers, including mobiles, toy musical instruments, learning boards and laptops.

WINFUNUSA’s toys fit into categories such as baby, infant, preschool, early learning and music, Salzmann says. “That’s pretty broad in the toy market,” he states, noting that most new companies do not specialize in so many categories.

Winfat’s parentage allows WINFUNUSA to grow without being involved in manufacturing, Salzmann says. “Typically, in a start-up company, the inventor has an item and they learn to manufacture that item at a reasonable cost and good quality,” he says.

Instead, Winfat does all of the manufacturing overseas at a very high quality factory, Salzmann says. “Some of the items are really good sellers,” he notes.

Despite the widespread reach of its lines, WINFUNUSA has found it a challenge to get retailers to carry its products. “Retailers are very cautious whom they give their store space to,” he says.

However, web sales have proved to be a receptive market for WINFUNUSA. “The Internet, in the last 10 years, has continued to offer start-up companies a place to put their products in front of customers,” he says.

Consumers enjoy the convenience of web shopping. “They’re able to do it when they want and the product is delivered to their house or office,” he says.

WINFUNUSA’s strategy is to expose its products on the Internet and then ship them to customers very quickly, in three days or less. “To do this, you have to have electronic order transmission,” Salzmann says.

WINFUNUSA manages this through two partnerships. One is with SPS Commerce, a supply chain management company based in Minneapolis, and the other is with IDS Logistics, based in Plainfield, Ind.

With both firms, Salzmann says, WINFUNUSA can reach 80 percent of the U.S. population in three days or less. “The speed of delivery and consistent order processing is the real key [to success],” he says.

The firm also provides WINFUNUSA with ancillary services that allow it to meet the customers’ expectations. “In the new model of ecommerce, SPS Commerce can hold up WINFUN as an example of successful, scalable growth without significant financial constraints,” Hansen adds.

IDS has provided WINFUNUSA with a distribution center in Indianapolis that specializes in working with start-up companies. IDS Executive Vice President and COO Mike Jones says his firm helped make WINFUNUSA’s start-up successful and scaled up as it grew.  In addition, IDS provided the technology to automate drop-ship relationships and processes, and a customer service staff. Jones also praises WINFUNUSA for its communication during the holiday sales seasons.

“WINFUN not only provided timely forecasts of expected volume so we could design this year’s solution appropriately, but Tom also provided regular and timely updates when he saw significant variances to actual sales,” Jones says.

Salzmann adds that the warehouse puts WINFUNUSA in an ideal position, since most of its Internet sales come from the east and west coasts. “We didn’t want to [have] five-day delivery times for any customers,” he says.

Salzmann believes WINFUNUSA will win more retailers as clients. In 2013, “We will be presenting retail programs to the major [and] mid-range retailers,” he says. “They would have the opportunity to carry a retail program or utilize our drop ship facilities.”

The company also plans to offer more toys, including play mats. “[Those] are a popular category,” he explains. “That will be the next stop we’re pursuing actively.”

He adds that Winfat also will be displaying at Toy Fair 2013 this February in booth No. 5560. “Many new baby musical items, ball games and track sets will be shown,” he says.