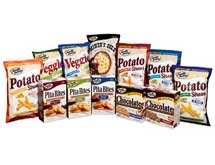 Instead of feeding the fad-diet frenzy, this food manufacturer is developing great tasting, healthy snacks and has big plans for future offerings. Most grocery shoppers today are looking for products that are lower in price and healthy yet still taste good.  Finding the right fit for each family can be a challenge, but Jason Cohen and Jerry Bello seem to have found the right mix with their brand of better-for-you snacks called Sensible Portions.

“We set out to transform the snack category with sustainable, better-for-you products that weren’t part of an over hyped fad, said Cohen, president of World Gourmet, the parent company of the brand. “Portion control and the consumption of the right ingredients and nutrition are keys to improving overall health, and our products give consumers the same satisfaction they crave from unhealthier products.”

Cohen and Bello, who serves as CEO at World Gourmet, got into the food business on a whim when they decided to start a biscotti company called Mama Says in 1998; each cookie had a saying with it, fortune-cookie style. Within a short time, the entrepreneurs landed high profile accounts including the Venetian Hotel in Las Vegas, Costco, BJ’s, and Krogers. The biscotti were even a unique feature at the highly publicized wedding of Catherine Zeta-Jones and Michael Douglas.

After the biscotti gained critical mass in the club stores, the team partnered with Kelloggs Food Company to distribute it nationwide. This required Cohen and Bello to build a state-of-the-art factory where they learned the importance of being in control of your own production.

“We sold Mamma Says to the Nonni’s Food Company in 2005, and then we spent time researching snacks from around the world, especially Europe, looking at how different cultures make food,” said Bello. “We found some equipment in Belgium that expands or instantly bakes dehydrated grain pellets, creating crunchy snacks that are high in taste but with as much as 70% less fat than traditional potato chips.”

The team invested in a snack food plant in Lancaster Pa. in 2006 and ultimately acquired all of its assets in 2008. This has become Sensible Portions’ one-stop-shop with nine production lines and the capability to produce unique snack foods as well as develop cost-efficient and effective displays and shipping containers.

The Sensible Portions team understands what retailers are looking for: healthy snacking options that are affordable and deliver a unique experience, so as to build their incremental sales in that category. The company’s factory investments have gone a long way toward delivering highly affordable products, but the team didn’t stop there. Bello and Cohen spend lots of time with their retail partners during their Innovation Days, when they host factory tours and talk about new products.

One of the company’s hottest products last year was Pita Bites, the world’s first pita cracker, invented by tweaking the company’s proprietary equipment. Retailers were blown away, Bello said. “That’s one of the best parts of the job; we love providing this expertise and excitement.”

Cohen and Bello also understand that, when operating in the better-for-you category, right-sized portions can be even more important than the calorie count or fat content of a product, so they developed packaging and merchandising tools that clearly show how much of their products makes up one serving.

“Too many companies try to confuse or trick the customer about portions by altering serving sizes in their nutritional panel. We want to be an honest partner in helping our customers eat better without sacrificing the taste and comfort of traditional snack foods,” said Cohen. “To gain consumers, you need to deliver a similar sensory experience.”

Sensible Portions has very loyal customers for another reason: its responsiveness to customer feedback, be it positive or negative. Bello said he and Cohen started communicating directly with customers back in their Mamma Says days; people were encouraged to send in sayings, and if they chose yours, you’d receive free biscotti. He added that, by starting Sensible Portions in clubs instead of in grocery stores, the company was able to take advantage of regular in-store demos.

“We receive almost immediate feedback with our people on the floor talking to customers about our products. Too often, entrepreneurs fall head over heels in love with their product and don’t hear criticism or acknowledge it might need to be changed; we avoided that from the beginning by making our company highly accessible to consumers,” said Bello.

He added that the company launched one of its very popular pita bite products with a new, tangier spice, but when consumers complained the flavor was too much, they scratched that and opted for a milder seasoning.

Sensible Portions also emphasizes the personal touch when pitching the product to buyers. Cohen said he sends lots of samples and tells buyers to have their kids try the products. He said the company also works with a number of mommy bloggers, sending them products to get feedback on how their families or readers like them.

“Food is a very personal thing, and we know the best way to be successful is to make our product familiar and comforting,” he said. “We also know what parents are looking for healthy snack options their kids love, so if we can please the kids, we’ll get customers for life.”

Today, Sensible Portions are found in more places than just national club stores. The brand is already in about 50% of the grocery chains in the US, and Bello estimates that number will be at least 80% by the end of this year. He also hopes to have the products in at least 25,000 C-stores in that time; they can already be found in about 7,000 across the country. In addition the company is touted as the better-for-you snack in major sporting arenas across the country.

The brand’s great taste and healthy features have made it popular on both coasts as well as in the middle of the country, where some other better-for-you food brands haven’t penetrated. And while most competitors are struggling with the costs of production, Sensible Portions is its own manufacturer and packer, making it one of the most cost-effective better-for-you brands in the country.

Cohen and Bello have big plans for their products, saying they see the current line as phase one of turning Sensible Portions into a nationally recognized lifestyle brand with frozen foods, dips, spreads, and more.

“The challenge for us is too much innovation. We’re here with our machines all day, thinking about ways to produce healthier, tasty products,” said Bello. Cohen added that the company’s pursuit of unique distribution channels, like sporting arenas, is a promising avenue of growth.

“The trend toward healthier living has only just begun, and we want to be a part of that from all angles for many years to come,” he said.