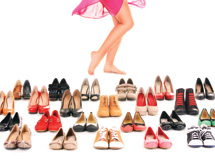 Everything wears out eventually, including shoes. Apparently unwilling to dye their shoes the latest color or have the soles or heels patched one more time, women grew total dollar sales of their footwear in the United States by 4 percent in 2012, according to the NPD Group Inc.’s consumer tracking service.

“For the last couple of years, men gave women a run for their money at retail, with growth in sales of men’s footwear consistently outpacing growth in women’s,” says Marshal Cohen, the NPD Group’s chief industry analyst. “I believe this is testament to the newness of products offered by retailers that did, in fact, get the consumer to respond. I think this also goes back to the ‘frugality fatigue’ phenomenon we have been watching. It seems to have materialized for footwear in 2012 as women finally stepped into new shoes.”

“Looking at the women’s market numbers, it becomes evident to me that it was the heritage branded products that had the most impact and helped grow the business,” Cohen says. “The women’s footwear market continues to be a huge growth opportunity for many retailers.

“Even though the economy is still sluggish, women will still opt to update their wardrobes,” Cohen asserts. “After all, you can go just so long with wearing the same shoes and expecting them to be comfortable. Look for this need cycle to continue into spring, and as long as retailers showcase new merchandise worthy of consumers’ investment, women will continue to update their footwear collection.”