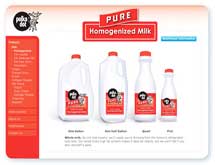 This dairy distributor is growing again by refocusing on its foundation: high quality products at fair prices, delivered with outstanding service. After 56 years in business, Polka Dot Dairy is exhibiting great adaptability to business in the 21st century. This family-owned dairy distribution company, which went live with its first Web site a few weeks ago, is picking up speed.

Four years ago, Polka Dot was a very different company. It had a retail division in the form of several Tom Thumb c-stores that the company’s founder, Wally Pettit, originally opened as somewhere to sell his milk. The chain grew quickly, but in the late 1990s, it suffered as the market changed. Big-box discounters moved into the area, and larger grocery stores began to stay open later, on Sundays, and on holidays. The competitive advantages Tom Thumb had capitalized on disappeared, and the chain eventually went bankrupt.

At about that time, Wally’s children Joel Pettit, Patrick Pettit, and Brenda Fahey took over day-to-day operations. Joel Pettit described the process of dismantling the Tom Thumb chain and switching the business over to wholesale as a long divorce.

“Tom Thumb was run separately from our distribution business, but that’s not to say the two were not intimately intertwined,” he said. “It’s been a long few years getting out from under that, but we’re up and running now.”

Polka Dot is one of the leading dairy suppliers to mid-sized, independent grocery and convenience stores in Minnesota and Western Wisconsin, distributing milk, cheese, cream, cottage cheese, and fruit punch. It also distributes Tropicana orange juice and Nesquik chocolate milk for those companies,  as well as yogurt, sour cream, and cottage cheese under the label Old Home.

For its own line of products, Polka Dot launched a new label this year featuring an updated rendering of its signature character, Dotty the Cow. Pettit said the last time the company updated the label was close to 20 years ago. Previously, Polka Dot milk had only one label, on the front of the bottle, which didn’t provide enough space for nutritional information, never mind any color or illustration.

“We spent some money to have the label designed because we wanted to dress our milk up a little,” he explained. “We wanted a bright label, but we wanted to keep the vintage look to signify our history and because Dotty is well known around here.”

It took several months to finalize the design, but as of August, the entire line is sporting it on shelves in more than 400 locations surrounding Minneapolis, Minn. The new label design also distinguishes Polka Dot’s main brand from its generic brand, which will continue to use one label.

To accompany the new look, Polka Dot is launching its first-ever marketing campaign and Web site. Pettit was quick to emphasize that the company is experimenting and that more targeted marketing efforts, as well as e-marketing strategies, are to come. Currently, the company has a package with the local Fox Sports affiliate, which Pettit said is paying off beyond their expectations.

“We’re are just getting our feet wet and learning as we go. We knew we needed to do something, so we’re going with what feels good and developing a more strategic, long-term plan in the meantime,” said Pettit.

The Web site went live a few weeks ago as a simple informational tool centered on the new logo. It includes a list of products and a list of stores to buy them from, as well contact information and an About Us section highlighting Polka Dot’s tradition of family focus. Eventually, Pettit said the site will include quote request and online ordering capabilities.

The ultimate goal of these marketing efforts, Pettit said, was to break into the many larger independent grocery stores and chains in the region. He said most are too small to get attention from the big dairy companies, but in rural Minnesota, they are where people shop for food, and they appreciate local, low-cost dairy products.

“At first, we tried the schmoozing that larger distributors do, the baseball tickets and wining and dining, but all that does is drive up our costs. Everyone is focused on price these days, so we get more attention for providing high-quality at the lowest price possible,” said Pettit.

The strategy is paying off: Polka Dot recently began servicing a 53-store chain, which in part fueled the company’s recent investment in four new trucks. The company has been using a fleet of older, standard trucks that were not in line with new emissions standards that call for greater bio-diesel content and were insufficient to cope with more orders.

Pettit said distributors everywhere are investing in newer trucks to keep up with the new standards but added that the new trucks also have four different colored cabs, making the fleet look larger than it is. These trucks don’t yet incorporate the company’s new logo, but Pettit said he is fine with that. “It’s expensive to change all our materials at one time, and our old logo still carries a lot of weight around here. We’re looking at buying so more trucks in the next few years, and they’ll have the new artwork.”

He emphasized that he and his siblings are taking on the 21st century one day at a time because Polka Dot has operated for so long without today’s practices and technology; when Pettit’s father started the company, most of the technology people take for granted today wasn’t even a thought.

“We’re trying new things just to try them, which sounds naïve and perhaps it is,” said Pettit. “But we’re in a unique position: we have more than 50 years of experience in this market and in dairy distribution, but we have the feel of a brand-new start up with world of opportunities ahead of us.”