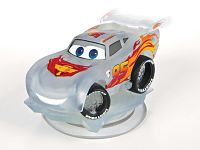 Aug. 15, 2013 – Toys”R”Us stores nationwide and Toysrus.com will become the ultimate retail destinations for consumers eager to explore the new, magical worlds of Disney Infinity when it officially launches this Sunday, August 18. Disney Interactive’s new video game platform, which will be available on the Xbox 360 game and entertainment system, the PlayStation 3 computer entertainment system, Nintendo 3DS, Wii, Wii U and iPad, integrates collectible figures featuring beloved characters from The Walt Disney Company and Pixar Animation Studios with an immersive video game experience that allows the characters to come to life and interact together – for the first time ever. In the U.S., Toys”R”Us also will be the only place where fans can find figures from the Infinite Crystal Series, an assortment of exclusive, collectible figures that have enhanced in-game abilities, as well as exclusive Power Discs that unlock special in-game powers, gadgets, vehicles and more.

“Disney Infinity offers kids the opportunity to not only combine their toys and the digital world, but allows them to bring together their favorite Disney and Pixar characters, including Jack Sparrow from Pirates of the Caribbean and Lightning McQueen from Cars, creating new worlds and storylines of Disney magic,” said Richard Barry, Executive Vice President, Chief Merchandising Officer, Toys”R”Us, Inc. “We’re thrilled to collaborate with Disney to bring this unique game and product – including those available only at Toys”R”Us – to the many fans and gamers who have been eagerly awaiting this exciting launch.”

In a way that only Disney can, each Disney Infinity character figure will come to life and play together in a virtual “Toy Box.” The game also includes a story-driven experience, “Play Set,” which allows players to solve challenging puzzles, battle enemies and explore iconic locations from famous Disney properties. In “Toy Box” mode, players can build and customize their own unique virtual world using their favorite characters, vehicles, settings and accessories.

Disney Infinity is launching with an initial line of 18 collectible interactive figures and 21 Power Discs, including those found only at Toys”R”Us. To help fans build their Disney Infinity collections, Toys”R”Us will offer the largest assortment of Disney Infinity products available.

“Disney Infinity delivers a magical experience that kids generations over have come to expect from Disney, and we’re pleased to partner with Toys”R”Us to provide kids and families across the country with unique content they can’t find anywhere else,” said Bill Roper, Disney Interactive Vice President and General Manager of Product Development.