“We try to give the guest an experience beyond what they expect,” he says, adding that this continues, even after the point of delivery. “As long as they have the bed, it’s upon us to do the right thing.” 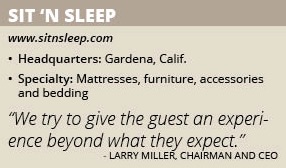 Miller co-founded the Gardena, Calif.-based company in 1979 with his father. “We were failing in another business and realized it had no future for us,” the younger Miller recalls. “We closed all the stores but one.”

That remaining store became the first Sit ‘n Sleep location. “We sold products you could sit and sleep on,” he recalls, adding that the company became the biggest futon retailer on the West Coast.

But Miller became doubtful of the future of the futon business and migrated the company towards mattresses from well-known brands, including King Koil and Beautyrest. He also embarked on advertising campaigns that included doorknob flyers and ads in the LA Weekly.

But Miller sought to do more. “That type of advertising was great for the ‘50s, ‘60s and ‘70s, but I realized people’s consumption of information was changing,” he recalls.

He then bought spots on talk radio, including “The Howard Stern Show,” as well as television. Miller served as the spokesperson in these ads, “only because we didn’t have any money,” he admits. “People in L.A. know my voice.”

But the hard work paid off. “Our business went up 50 percent that year,” he says, noting that the company built a location in Culver City, Calif., and added more name brands, including Spring Air International, Simmons Bedding Co. LLC, Sealy Corp and Serta Inc.

In 1996, Sit ‘n Sleep’s Culver City location enjoyed $10 million in sales, which was the highest number for a single mattress store. “I realized we had something special,” Miller says, noting that he chose to add more locations.

Today, Sit ’n Sleep has 39 stores in California that sell mattresses, furniture, accessories and bedding, and adjustable beds. It plans to open another this September. “They’re all high performers compared to the industry average,” Miller says. “It’s been a great ride.”

But Sit ‘n Sleep is not resting on its laurels. It continues to find ways to evolve the business. “We’re always trying to raise the bar,” he says, noting that the company wants to keep the customer experience fresh.

“What we offer is the Sit ‘n Sleep experience, which is different than any other mattress store,” he says, noting that it operates large locations with more merchandise.

The stores also set themselves apart with bedMATCH© technology that collects information about a customer or married couple as they lie on a mattress through a computer system, and recommends support levels. “That’s been a difference maker,” Miller says.

The locations also strive to hire the best people in the industry. But mattress experience has not been a requirement. “[We want] people that are great communicators,” he says.

“We can teach them about coils, motion bases and sheets,” Miller says. “When people are friendly and warm, you can do a lot with those folks. If they don’t have [those traits], then they shouldn’t be in our company.”

This has kept clients coming back to its stores. Although Sit ‘n Sleep enjoys e-commerce sales, “The majority of consumers will look at our website and come in,” he says. “It’s decidedly a better experience to come in the store, as long as we have young, bright capable people that are fun.”

Sit ‘n Sleep has kept customers coming back to the company, but it also has kept its employees loyal. “My best [trait] is knowing good people, understanding what it takes to attract them and keeping them,” Miller says.

The company has zero turnover in its retail stores, except for those who retired. “That’s very unusual in our industry,” he says, noting that Sit ‘n Sleep employs many who have been with the firm for 25 years.

With the company’s compensation program, “Our associates find it relatively easy to make a living that’s good enough to buy a house and raise children,” he says. “We also have great fringe benefits like 401k [programs and] health insurance.”

Sit ‘n Sleep also promotes heavily from within, which gives them the opportunity to grow. “Life is not always about how much you make,” Miller says. “It’s about how you touch other people’s lives. That’s important to us.”

One example, he notes, is Angie Jones, who initially worked as an assistant in the company’s accounting department. “Now, she’s managing one of our best stores,” Miller says.

Sit ‘n Sleep also improves people’s lives through community support. “I always promised myself if we ever became successful to give back,” Miller says. “If you’re making money and you don’t give something back, you’re not good.”

Miller notes that he will soon receive an award from the Jenesse Center, an organization that assists women and children escaping from domestic violence, for his charitable work. The company also has contributed to The Susan G. Komen Breast Cancer Foundation Inc.

“We also raised millions of dollars for City of Hope Los Angeles,” he adds, noting that the company also donated beds to Habitat for Humanity. “If there’s a need, we try to help out.”

Sit ‘n Sleep’s staff also is involved community outreach. “We have a lot of volunteers in our company trying to help all these different charities,” he says.

Miller sees a strong future for Sit ‘n Sleep, which will continue his family’s involvement. “My son Andrew and my nephews (the sons of Sit ‘n Sleep co-owner and President Nelson Bercier) Jeremy and Nate are involved with the business,” he says, noting that the three will ultimately take leadership of the company.

“They’re all sharp, hard working good kids,” he says. “My greatest joy would be to see the next generation take it to the next level.”