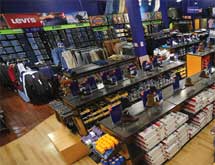 When a retail company switches ownership, there’s an array of situations that might occur. In terms of both internal operations and what the customers see, it’s possible that little may change. But this isn’t always the case, and it wasn’t for Work ’n Gear.

Anthony DiPaolo purchased Work ’n Gear from Casual Male Corporation in 2002. The asset purchase granted DiPaolo rights to the company’s inventory, leases, and employees, but he had to build all other aspects of the business from scratch. The first steps he took were to install updated IT systems, implement operational guidelines, and organize the infrastructure. Soon after, he established distribution centers.

At the time, Work ’n Gear had 56 stores open in the northeast corner of the US. Since then, DiPaolo, president and CEO, closed locations that weren’t profitable and opened a few others, bringing the total to 45 today.

“As soon as I purchased the company, the first thing I had to do was find a new operating system,” DiPaolo said. After doing a lot of research, DiPaolo found a company called Celerant Technology that was able to develop an IT system for Work ’n Gear. “I consulted with teams at other companies that are about the size of mine, and all points led to Celerant,” he continued.

In less than six months, the team at Celerant developed the operating system for DiPaolo. As soon as it was completed, the system was integrated, and the new Work ’n Gear was up and running. Up until that six-month point, the previous owners, Casual Male Corporation, continued operation of the company.

“Because the previous ownership kept control of the company for that transition period, I was able to dedicate my time to working with the team at Celerant and develop a system immediately,” DiPaolo said. This transition happened seven years ago, and the team at Work ’n Gear still uses it today, although an update is planned for the near future.

According to DiPaolo, the updated IT will give the team more robust merchandising abilities. “We’ll be able to do auto-replenishment more seamlessly, connecting ourselves directly to our vendors,” he said. “We’re streamlining the supply chain, and it’ll free up the merchants from doing any repetitive work.”

Headquartered in Weymouth, Mass., Work ’n Gear employs approximately 400 people. When DiPaolo purchased the company and implemented changes across the board, some employees were wary of change.

In the beginning, DiPaolo tried to follow a similar path as the previous owner, opening stores in strip centers and freestanding locations. Early on, however, he learned that this was an unsuccessful real estate strategy.

“It was too expensive, in terms of marketing, to drive customers to those locations and get the store to a reasonable level of profitability,” DiPaolo said. As a result, the team at Work ’n Gear decided to test mall locations. The first two mall stores opened in Massachusetts, and they were both successful from the start.

Since that point, DiPaolo and his team have focused on opening locations inside malls, and, consequently, their marketing strategy has evolved. The sales teams at many locations were hesitant at first.

“Getting people to change is never easy,” DiPaolo said. “I wanted to change this company from one that was marketing driven to one that was window driven, and it took a while for some associates to get used to that.”

After the transition period, however, most employees were able to adapt, and, today, the business is doing better than ever. According to DiPaolo, sales at the new locations are growing at a rate that’s between 50% and 60% faster than other stores.

Although a global recession is in place, DiPaolo said his stores are unaffected. “Operational challenges are not accepted at Work ’n Gear,” he said. “The term recession isn’t in our vocabulary.”

And DiPaolo isn’t all talk. Last year, the company opened seven locations, and it’s opening another this moth. “In terms of the economy, we have a mandate from the CEO down: we refuse to take part in the recession,” DiPaolo continued.

To make this concept work, every member of the team at Work ’n Gear is held responsible for meeting his number in terms of sales, and managers across the board are required to ensure customer service is unparalleled and products are pushed as best as they can be.

“We recognize it’s a value-driven economy, but under no circumstances will we accept sales losses,” DiPaolo said. “Changing a retail company from one focused in strip centers to one focused in malls is an exciting process. The landlords are great to work with, which reduces our costs from that perspective.”

According to DiPaolo, mall landlords have welcomed the company with open arms simply because it doesn’t compete with any other stores. As a result, Work ’n Gear draws a different crowd of consumers into the mall. Although the company used to sell only traditional work wear, its inventory was recently expanded.

Today, the company sells a wide range of clothes that can be worn to work or to social events, and DiPaolo said the new model has been a success. “Our focus is to build a great product, whether it’s working with our branded partners or developing our own products,” he said. “No matter what we’re selling, we have strict quality requirements that keep our customers coming back.”