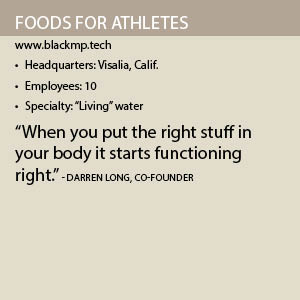 “I played in the NFL most of my life and at 40 years old I started coming apart,” Long says. “I realized I had to get more nutrients and my son D.J. and I had to find them. I came down with CTE or severe brain trauma because of the concussions and at the time I didn’t know anything about it. I was battling cancer and my fingers were starting to deform because of arthritis. The thing is, it was a mineral deficiency.”

There are deposits of fluvic and humic acid around the world, and Long found a 300-foot-deep deposit in New Mexico. BlackMP’s minerals come from the natural process of humification. Studies show that this process takes place over millions of years. It is a result of fruit trees and vegetation decaying and pressurizing to form complex substances rich in essential minerals, amino acids, electrolytes and other beneficial compounds.

“Most people don’t understand that our bodies are 99 percent minerals,” Long explains. “Three things that make up the body are minerals, bacteria and water, and you have to replace those. Look at your body as a copy machine, you can buy a brand new one but it will only run for so long until the paper depletes and the ink levels decrease. Look at minerals as your ink – you have to replace those daily.”

“At one time we got minerals in everything – food and water,” Long says. “When they started bottling water that was our last source of minerals and now it’s gone. Food is the same way. Farmers are always broke, Long says, so they don’t have money to put down minerals. Plants and animals don’t manufacture minerals – we have to get it from a source. According to the FDA’s soil studies, there is nothing in the soil. The nutrients are depleted. The last USDA study of minerals was published in 1997 and it said there are no minerals in soil or any food. We have to have minerals to live.”

When people are mineral deficient, their bodies will tell them. The No. 1 sign is low energy and the second is some kind of pain that eventually turns into liver or kidney disease or arthritis, for example. The federal government says we need 60-plus essential minerals daily. There are up to 40 minerals in dog food, but only nine synthetic minerals in baby food, Long says. “One thing I know for sure is that nature knows what to produce and our bodies know how to utilize it,” he adds. “We will never truly understand how the body works, but if you put the right stuff in your body it starts functioning right.”

Foods for Athletes – BlackMP is able to extract the minerals and turn it into a pure liquid concentrate and a powder form. “We think BlackMP Living Water should last another 100 million years,” Long says. “The minerals never go away and we have a high pH in our water. When our water was tested, scientists said they have never seen anything like it because the pH level doesn’t drop like it does in most waters. Dr. Otto Warburg was a two-time Nobel Prize Winner in the 1930s and discovered cancer. He said that cancer can’t survive in an alkaline environment and a lot of sicknesses are due to mineral deficiencies.”

Most alkaline waters use bicarbonate and electricity to manipulate the water and temporarily bring the pH level up. The problem is, the alkaline waters do not increase the pH levels in the blood. “You have to get you blood PH levels up to fight off cancer or other diseases. That’s the secret of this stuff and I’ve introduced it to all my buddies in the NFL because they are all really messed up.”

BlackMP Living Water is endorsed by the NFL Alumni Pro Football Legends Associations because former players were reporting their pains going away and those with cancer are now said to be in remission. “Humic acid is anti-viral, anti-bacterial, anti-tumor and anti-cancer,” Long notes. “We are just now learning about this stuff. It’s being called a miracle molecule. Humic acid is what causes the water to turn black and has an amazing ability to hold moisture. That moisture is instantly hydrating, cleanses your brain, organs and bones. That’s what this beautiful molecule does.”

Foods for Athletes – BlackMP is a small company of 20 employees with a goal of educating the world on the benefits of the humic and fluvic acids in BlackMP Living Water. Long says it took about a year-and-a-half for him to “get his life together” after he started drinking BlackMP Living Water. “I had cancer, arthritis, CTE, kidney stones – basically everything you can think of,” he adds. “One thing I can tell you for sure, just the energy I got on a daily basis changed my life. I’m almost 60 years old and I can’t say I felt this good when I was 20 years old and in top shape getting ready for the NFL.”

When drinking BlackMP Living Water, Long says some people feel an immediate difference while others may see changes in a week or a year. It all depends on how much mineral depletion is in your body. “Be patient,” he adds. “When people start drinking BlackMP they drink it for the rest of their lives.”

BlackMP Living Water was recently picked up by Whole Foods Market and other major retailers, Long says. “We have four different water companies now bottling it for us,” he adds. “C&S Distribution has taken us under their wing and helped us grow.”

Moving forward, Foods for Athletes – BlackMP will continue to innovate and develop new products. The company is working on developing a spray for foods that will introduce bacteria to popcorn or cookies, for example, and plans to introduce the product to private companies in the near future.

Long and his son plan to publish a book that Long says is a “tell all” and must read called “Sick Soil, Sick Food, Sick People.” “The book will help people really understand what’s going on,” he adds. “I want to educate everyone around the world. The proof is in the pudding. We didn’t pay for any of our endorsements – they are offered to us. The NFL Alumni Pro Football Legends Associations, California USA Wrestling and the National High School Coaches Association gave it to us because this stuff works.”