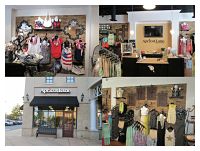 September 3, 2013 – Apricot Lane has been moving to the forefront of chic boutiques since its launch in 2007. Owned by Country Visions, Inc. the company is on target to open 20 stores in 2013 bringing its total store count to 95 across 38 states and projecting $45 million in 213 system sales. The Apricot Lane Boutique Franchise, a branch of Country Visions, Inc., is anticipating exponential growth during the fall of 2013 and spring of 2014, projecting the opening of 40-50 new stores, with the 100th store opening slated for Spring 2014.

Apricot Lane Boutique brings celebrity-inspired, West Coast fashions to the convenience of neighborhoods across the country by carrying an impressive collection of apparel, jewelry, handbags, accessories and gifts to create looks seen on the runway and in the pages of any current fashion magazine, for affordable prices.

With banks lending again, Apricot Lane is seeing over half of its stores owned by multiple store franchisees. This ensures the franchise model is in fact a success, enabling these owners to create their own modern day family business. Many of the franchisees are husband and wife or mother and daughter, working together and savoring their successes and expansion as a family.

The growth of the company has also led to stores opening in new venues such as airports (San Diego, Las Vegas), which paves the way for international expansion by partnering with concession retail groups whose focus is on airport locations with multiple concepts.

The biggest factor setting Apricot Lane apart from other franchise systems is flexibility, something not often associated with franchising. “We found that by letting franchisees try new things, it only ended up benefiting our entire company and definitely has helped to increase our growth,” explained Ken Petersen, founder and CEO.

Apricot Lane knows a key to their success is learning from each other, encouraging continuous input and feedback from its franchisees which has led to the discovery of its most valuable vendors to date such as E-Websmart, SGPR Group and assisting with services ranging from website design, public relations and overall owner support for human resources, staff recruitment and more.

A big feature of the Apricot Lane franchise is its development process. Where most companies require prospective business owners to attend Discover Days that can be a hindrance to schedules and costly, Apricot Lane created an online Discovery Day followed by a trip to the prospective owners hometown with exclusive and experienced retail real estate brokers to scout locations and conduct an on-site evaluation report. Many times, Petersen will also make the trip to get to know a prospect better to ensure a good “fit”. This on-site process takes 1-2 days. A decision to award the franchise is made after this visit and the entire process from initial contact to franchise award can be as quick at 3-4 weeks instead of several months.

Apricot Lane stores have also experienced success by creating a unique atmosphere appealing to both mothers and daughters, teens through fifties. By offering brands and accessories that allow women of different ages to express their individual style coupled with the constant flow of new inventory arriving daily and in small quantities, stores are able to stay on top of ever emerging fashion trends and keeps shoppers coming back frequently. This creates a sense of urgency to see what has arrived in store. Customers are compelled to buy the items they love the first time they see it since it may not be there an hour later and will not be re-stocked unlike large chain retail establishments.

“A lot of the styles and brands found in Apricot Lane are favored by many celebrities so we’re excited to give people in smaller towns across the country a place to replicate those looks,” commented Petersen. “Since our owners are encouraged to always stay on top of the fashion trends our inventory and selection changes frequently. Every visit to Apricot Lane will be a fun experience and chance to discover something new,” he continued.

“By providing our franchisees with the support and benefits of a large corporate retail system yet still giving each store owner the flexibility to make their own decisions regarding design aspects of their store and merchandise selection, owners and shoppers are really getting the best of both worlds,” explained Scott Jacobs, President. “We are there with the technological systems in place for effective communications with franchisees, customers and staff and can hold their hand as much or as little as a store owner is comfortable with.”