Although the products may be fantastic, “If the item does not offer innovation or meet the quality bar our players expect, we don’t move forward,” he explains. “Our challenge is making sure that what we’re doing is not only good for the brand, but something that our players are going to respond to.”

One property that enjoyed a strong reception is Plants vs. Zombies, Vice President of EA Entertainment Patrick O’Brien says. “We’ve seen a real thirst from players to get more ‘story’ about this universe and characters than the games can provide,” he says. Dark Horse Comics Inc. has created a game-based comic book series, which is sold by Scholastic Inc. in schools. 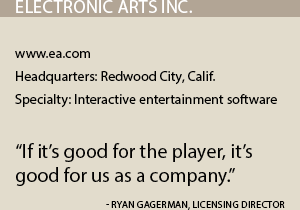 EA has developed strong relationships with Dark Horse, Jazwares and Scholastic, as well as other licensees including K’NEX. “So many of our relationships start with one brand and often one product, and grow from there,” O’Brien says.

Its relationship with Dark Horse began years ago with a Mass Effect comic. “It broadened to include collectibles with Dark Horse and now we’ve got four different titles with them: Mass Effect, Dragon Age, Mirror’s Edge and Plants vs. Zombies,” he says. “When partners do a great job, we tend to find more products to do with them.”

EA recently started partnering with companies on its sports games. “We recently partnered with McFarlane to connect their line very realistic collectible figures licensed by the NFL,” Gagerman says. “McFarlane Toys will be including digital content tied to our Madden franchise.”

EA’s relationships with retailers are important, too, including stores such as GameStop, Target, Walmart and Best Buy. “We look to them as a key factor in how we deliver a positive experience to our players,” Gagerman says.

“They are on the front lines,” he continues. “Retailers are finding and accepting the fact that video game players want more from the games they play, the worlds they love and dive into.

“’More can mean a variety of different products from collectibles and apparel, to books and art,” he explains. “We look at ourselves in some regards as a service provider to make sure [EA’s licensing group is] supporting retailers as they provide products that make sense for those channels.”

EA’s relationships will be important as it prepares to launch new Battlefield, Titanfall and Mass Effect games in the next 12 months with accompanying merchandise. “We’ll have a robust range of products across categories to give players experiences beyond the game,” O’Brien says.

The items in these launches are sometimes exclusive to the retailer, O’Brien adds. When EA launched its “Plants vs. Zombies Garden Warfare 2” game this past February, Target sold an exclusive Funko Pop! figure of Super Brainz, a game character.

“We think the right exclusives provide a great opportunity for key retailers to differentiate themselves in ways that appeal to their particular customers,” he says.

Gagerman and O’Brien take pride in EA’s culture of promoting a team philosophy. “In other companies, different divisions can be very siloed and make decisions in a vacuum,” Gagerman says.

“One of the great things at EA is there is a strong spirit of collaboration and teamwork,” he says, “There isn’t a ‘this is my world, stay out of it’ mentality.”

Its employees also take the time to have fun. “When you walk down the hall of our headquarters in Redwood City, you’ll see video game consoles, foosball tables and shuffleboard tables,” he says. “There are great opportunities for colleagues from different departments to come together and have fun with each other.”

They also often have the opportunity to try out EA’s licensed products. Before its recent release of Plants vs. Zombies products from K’NEX, “It was not uncommon to see samples in common areas where people were putting them together and enjoying licensed goods,” he says. “We’re making sure what we have out there we have fun with, too.”

EA is excited about the trends it sees in the retail space, O’Brien says. “We definitely see increased licensing and robust entertainment programs around video games in the future,” he states.

Gagerman agrees. “We’re excited that some of our key retailers are really changing their model and leaning into video game merchandise as they look toward the future,” he says.