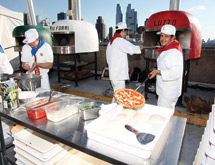 The Food Network’s New York City Wine and Food Festival presented by Food and Wine on Oct. 17 to 20 continued its long-standing tradition of designing unique lifestyle opportunities that appeal to everyone’s taste buds. This year, it was “Jets + Chefs: The Ultimate Tailgate,” which was presented by Diet Pepsi and hosted by Joe Namath and Mario Batali Oct. 19 at New York City’s Pier 92.

Batali gave his chef coat a rest and donned green and white gear to team up with NFL legend, Super Bowl champion and Hall of Famer Namath to host a day of grilling demonstrations, ramped-up tailgate fare and interactive fan-fanatic activities for the family. Like all festival events, proceeds from it benefitted the Food Bank for New York City and Share Our Strength’s No Kid Hungry campaign.

The event brought together more than 20 chefs and former New York Jets stars for a new type of gridiron classic that offered samplings of amped-up game-day cuisine and culinary demonstrations. Spectators also got in on the action with authentic FanZone activities, including the chance to win game tickets with pre-game field passes and take pictures with the New York Jets flight crew.

Batali and Namath were joined by former New York Jets players for the ultimate tailgate experience. The Jets partnered with the Institute of Culinary Education to launch the official New York Jets Cooking School – Tailgating Division. It provided opportunities for fans to participate in tailgating classes and football-themed cooking experiences that started in September.

Passionate gourmands did not want to pass up the opportunity to attend the Food and Wine Best New Chefs 25th anniversary party presented by Delta on Oct. 18 at the Mandarin Oriental. It proved to be an extraordinary evening with 25 Best New Chefs winners from the last quarter-century attending.

Cocktail lovers were able to indulge their passion at several events during the festival. Those seeking to satiate a more savory craving attended the festival’s tribute to everyone’s favorite lunchtime combination at Hidden Valley’s Soup’er Sandwich, presented by Martin’s Famous Potato Rolls, and hosted by Jeff Mauro at Hudson on Oct. 19. More intimate dining experiences were available at one-of-a-kind, chef-driven offerings that were part of the Bank of America dinner series.

Additionally, the festival presented several new events that amped up the global atmosphere even more, including the Global Night Market, an Oktoberfest and a Gotham West Market opening party.

For wine connoisseurs or oenophiles, several events were held: a South African Wine Odyssey, Italy Meets Germany in Wine and Food, Diversity from the South of France and The Rosé Lifestyle of St. Tropez.

The 13th annual Food Network South Beach Wine and Food Festival presented by Food and Wine will be Feb. 20 to 23. The 2014 Festival features a variety of signature events, late-night parties, intimate dinner experiences and fitness activities in Miami.

The festival will kick-off beachside with a marquee event – the 2014 Sports Illustrated Swimsuit models. They will appear at the Delano on Feb. 20 with Moët Hennessy’s The Q, which is presented by Creekstone Farms and is sponsored by Miami magazine and hosted by Michael Symon. More beachside dining will be presented on Feb. 21, when fan-favorite chefs will compete at the Amstel Light Burger Bash presented by Pat LaFrieda Meats and hosted by Rachael Ray beachside at The Ritz-Carlton.

Other highlights will include:

Union Square Hospitality Group CEO Danny Meyer and Caymus Vineyards owner and winemaker Chuck Wagner will be honored at the annual tribute dinner at the Loews Miami Beach Hotel. Those looking for one of the festival’s swanky late-night soirées will be rewarded with plenty of options, as well.

The festival has raised approximately $18 million to date for the Florida International University (FIU) Chaplin School of Hospitality and Tourism Management and the Southern Wine and Spirits Beverage Management Center. As a result of these funds, the school will open its new teaching restaurant management lab during the festival weekend.