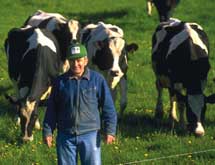 This cooperative developed green initiatives to increase its efficiency and decrease its carbon footprint. Some companies focus solely on increasing sales and revenue, but Organic Valley Family of Farms is also concerned with making the world a better place. To achieve the latter goal, the organization distributes healthy food that comes straight from the earth.

Organic Valley is a farmer-owned cooperative that distributes organic milk and other dairy products to retailers across the US. As one of the leading organic brands in the US, Organic Valley, which was established in 1988, represents 1,332 farmers in 34 states. Last year, the cooperative’s sales reached approximately $527 million.

The organization’s profit sharing model states that both farmers and employees are granted 45%, while 10% goes to the community. With a mission centered around preserving family farms through organic farming, Organic Valley distributes an array of products, including milk, soy, cheese, butter, produce, and juice.

But the cooperative isn’t focused only on its own business; the team at Organic Valley dedicates a significant amount of effort toward promoting green initiatives and raising awareness for nonprofit charities.

Because of its focus on organic food, the team at Organic Valley knows the importance of environmental stewardship. Consequently, the cooperative makes an effort to increase its inhouse efficiency and promote sustainability issues to the public.

The most recent example of this effort was announced in March when Organic Valley joined the EPA’s GreenChill Advanced Refrigeration Partnership, which was launched in 2007.

The partnership is an alliance between the EPA and companies in the supermarket industry, and its goal is to promote technology and strategies that help decrease the emission of ozone-depleting waste and gases. More specifically, the EPA works in conjunction with grocers and foodservice providers to reduce emissions generated from retail refrigeration.

Although Organic Valley just announced its partnership with GreenChill in March, the cooperative is already pulling its own weight. The organization uses an ammonia-based cooling system at its creamery and its distribution center. Because ammonia requires less energy than its alternatives when used in large industrial refrigeration systems, its impact on the ozone is minimal.

“If every supermarket in the nation joined GreenChill and reduced their emissions to the current GreenChill average, the industry could prevent the release of 13 million metric tons of carbon dioxide equivalent and 157 ozone-depleting potential tons annually,” said Cecil Wright, vice president of sustainability at Organic Valley.

“That’s a tremendous step in fostering a more sustainable supply chain for the entire food distribution industry,” she continued. “We’re delighted to be a part of this initiative and help promote the immense opportunities for cost-savings and contributions to the environment GreenChill offers.”

Giving back to the community

The team at Organic Valley is also concerned with giving back to the communities it serves. In March, the cooperative announced that it donated more than $2.2 million in cash and food to US charities in 2008.

Nearly $1.2 million of the contribution was donated to 586 nonprofit and/or educational organizations, and the remaining amount consisted of food that was given to food shelters across the US, including the Oklahoma-based Feed the Children and the Wisconsin-based God’s People Helping People.

“Our giving programs are an extension of our cooperative ideals,” said Theresa Marquez, chief marketing executive at Organic Valley. “When we give to great organic causes and to local communities, we get back tenfold. We consider every dollar given an effective way of supporting change for good.”

Of the nearly $2.2 million in cash and food donated, approximately half was generated from the organization’s foundation, Farmers Advocating for Organics (FAFO), which is funded and operated by the cooperative’s farmer-owners.

Participation in FAFO is voluntary, but many choose to take part. A selected group of members review several grant applications each year and award money to the causes of their choice. In 2008, the largest grant was awarded to the University of Minnesota. The grant was worth $45,000 and is being used to fund two studies: “No-Till Organic Research” and “High Tunnel Season Extension of Vegetable Crops.”

A grant for approximately $38,000 was awarded to an extension of the University of Vermont to fund its study on the feasibility and season extension of cereal grains as a source of organic feed. Other large recipients included Midwest Organic and Sustainable Education Service and Sustainable Agriculture Coalition.

Looking to the future, the team at Organic Valley plans to continue on its mission to create a visionary future for family farmers by promoting healthy food and giving back to the communities it serves.